Groped by Grandmother’s Boyfriend, What Should I Do?

Humanah’s grandmother’s boyfriend touches her inappropriately. Humanah thinks this is weird and she is not sure what to do about it.

Humanah: My grandmother’s boyfriend touches me in a weird way. Should I tell my mom or am I taking it too seriously?

How to Deal After Being Sexually Assaulted?

Dawson: What happened with you and your grandmother’s boyfriend?

Humanah: He touches me in a weird way. He’s just so weird. He’s always hugging me, and he doesn’t hug people very often.

Dawson: So, he’s kind of a shy, quiet guy but he’s hugging you and he’s touching you in places he has no business touching you. Is that correct?

Dawson: Tell me about an incident where that happened.

Humanah: It was Christmas night and we all were hugging each other and then he hugs me and tries to pick me up and then he grabbed my butt. I went away and went somewhere else. He was trying to talk to me and all that, but I just went away. I don’t know what to do. I don’t know if I should tell my mom or if I’m taking it too seriously.

Dawson: No, you’re not taking it too seriously. If it’s inappropriate to you and makes you feel uncomfortable then it’s inappropriate. Obviously, a guy touching you there is playing games with you. Actually, it’s sexual assault. Tell your mother then it’s up to your mother on what to do. I don’t know if we can press charges or not. It’s kind of a he-said/she-said kind of situation. But I would talk to your mother and say, “Mom, I need to be protected from this man.” And then your mother and you can decide whether or not to go to grandma. What do you think your grandma would do if she found out?

Humanah: I don’t know, she’d probably get mad at him. She’ll probably dump him.

Dawson: Good! You and your mother can go talk with your grandmother. You can’t let this guy keep doing this to you. It’s making you miserable. It’s wrong, it’s a violation, and it needs to stop now.

If you are trying to cope after sexual assault please visit our sexual assault topic page for blogs, podcasts, and stories from others for additional help and resources. 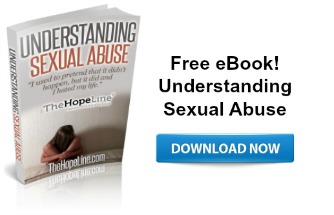 Sexually Abused By Dad, Should I Let Him Back in My Life?

What Should I Do, I'm Being Sexually Harassed at Work?